Walnut Creek “Rocked” during Celebration of the Century!

The City of Walnut Creek officially celebrated its 100th birthday in 2014, honoring the date of incorporation (October 21, 1914) as well as a century of progress and achievements.

Highlighting the year’s events was the Centennial Birthday Festival  on Saturday, October 18, 2014, which was attended by more than 5,000 community members, who enjoyed live music, local artisans, activities and crafts for kids of all ages — and birthday cake!

The Centennial officially closed at the Tuesday, October 21, 2014 meeting of the City Council — coincidentally, 100 years to the date of the official incorporation of the City. Then, on December 6, 2014, the community dedicated the Centennial Grove at Heather Farm Park, a legacy gift for the future.

To commemorate the celebration, the Centennial Committee developed a logo that reflects Walnut Creek’s cultural and historic legacy as well as its location at the base of Mount Diablo.

The Centennial Celebration was led by a committee of community volunteers who organized in early 2013 to plan the yearlong celebration. The City Council assigned Council Members Kristina Lawson and Cindy Silva to represent the Council on the Centennial Committee and selected Steve and Mackenzie Lesher as the Centennial Committee co-chairs. City Communications and Outreach Manager Gayle Vassar served as the project manager for the Committee.

During the Centennial year, community members were able to show their Walnut Creek Centennial pride and “take home the celebration” by purchasing one of the Walnut Creek 100 collector items.

Some items are still available for purchase online. In addition, books about Walnut Creek’s history are available. Contact Shadowbrook Winery for information about the Centennial Blend wine.

An Illustrated History of Walnut Creek  $27

More than 5,000 community members of all ages celebrated Walnut Creek’s 100th Birthday at the Centennial Birthday Festival on Saturday, October 18, 2014 at the Shadelands Ranch and Museum.

Flappers and Flasks: Roaring in the Centennial

Walnut Creek kicked off the Birthday Celebration on Friday evening, January 24, 2014  at “Flappers and Flasks: Roaring in the Centennial.” Read more.

Flappers and Flasks: Roaring in the Centennial 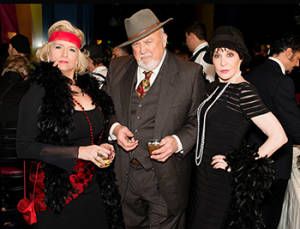 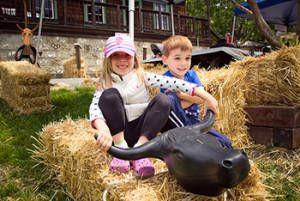 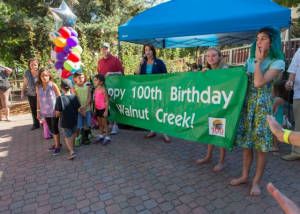 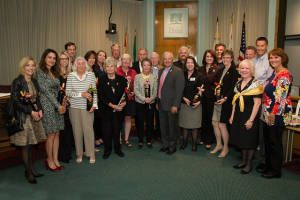 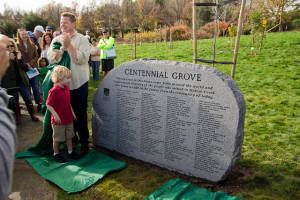 The Centennial Celebration would not have been possible without the generous support of the local business community and their contributions, which helped to fund Centennial special events, publicity efforts, and a Legacy Project.

SPONSOR OF THE CENTURY

Contributions were made in honor of:

Contributions were made in honor of:

FRIENDS OF THE CENTENNIAL