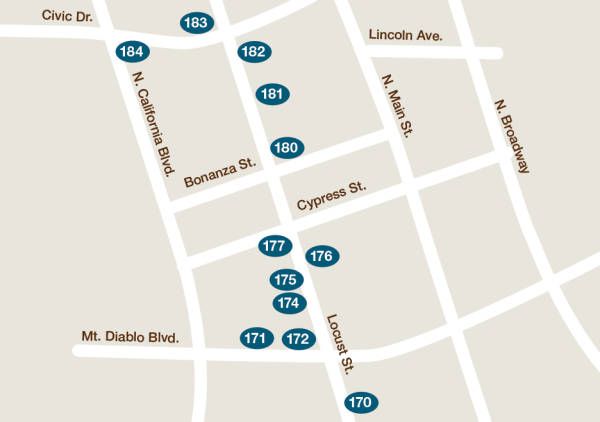 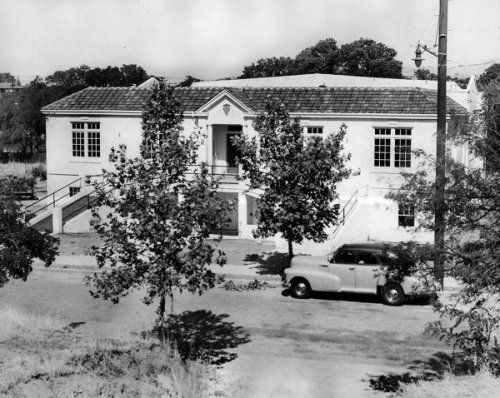 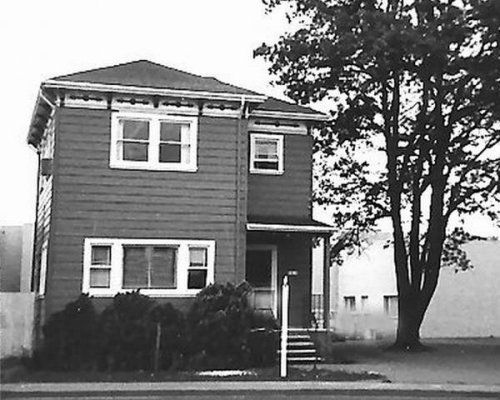 #171
Dole House
1614 Mt. Diablo Blvd.
Early 1870s
Built by Eldridge Dole (local architect), the Italianate house next to the old Masonic Temple was originally the ranch home of Lawrence and Margretta Peel. Peel operated a mercantile store on Main Street in the 1860s. The home had many owners over the years and has been in commercial use since the 1960s. 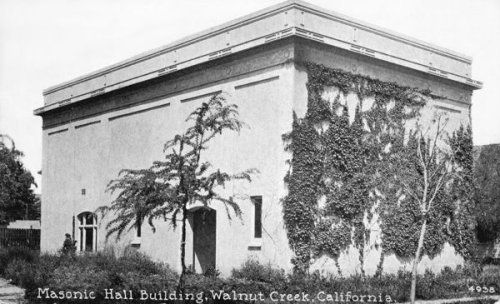 #172
Masonic Temple
1604 Mt. Diablo Blvd.
1916Founded in 1873, the Walnut Creek Masonic Lodge built its own Masonic Temple in 1916. For many years, the Lodge had met on the second floor of a building on Main Street. The Masonic Temple was expanded in 1953. In 1984, it was closed. Since that time, the building has been home to a number of different retail establishments. 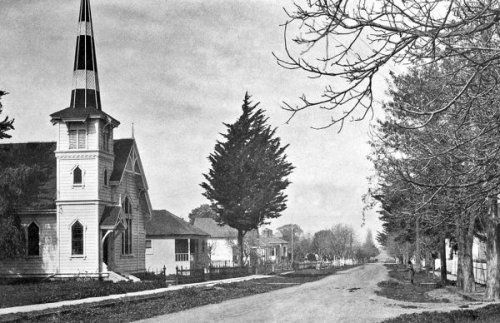 #174
Walnut Creek Presbyterian Church
1321 Locust St.
1884
After initially holding their services in the local schoolhouse, the town’s Presbyterians built their first church at this site on School Street (now Locust) in 1884. The lot was donated by Homer Shuey. A newer stone church replaced the original wood structure around 1930. The congregation moved to a new church west of downtown on Lacassie Avenue in the 1950s. 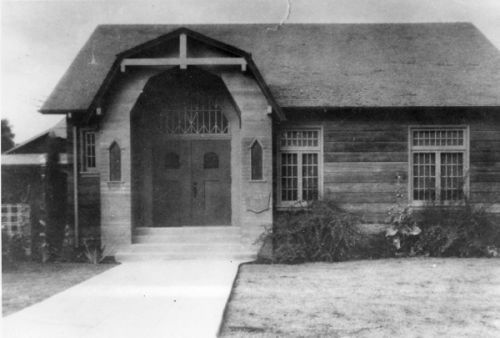 #175
First Church of Christ, Scientist
1345 Locust St.
1924A local group of Christian Scientists first began meeting in Walnut Creek in 1913, paying $1 each week to rent space at the Masonic Temple. Church members purchased this lot on Locust Street in 1920 and held their first service in their own church in 1924. A larger church was built in 1949. The church then moved to Eckley Lane in 1968. 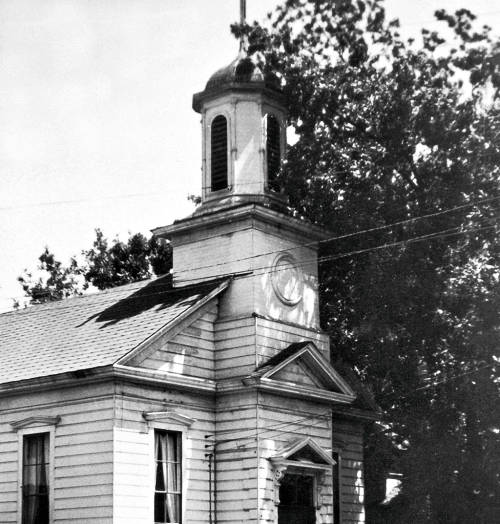 #176
Walnut Creek Methodist Church
1370 Locust St.
1872
The village’s first house of worship, built in 1872, originally stood on Main Street on land donated by Homer Shuey. By the early 1900s, the land on Main Street had great commercial value, so the church was moved to this site on Locust Street (then School Street), on land donated by James Stow. In the 1950s, the congregation built a larger church on Sunnyvale Avenue, north and beyond downtown. 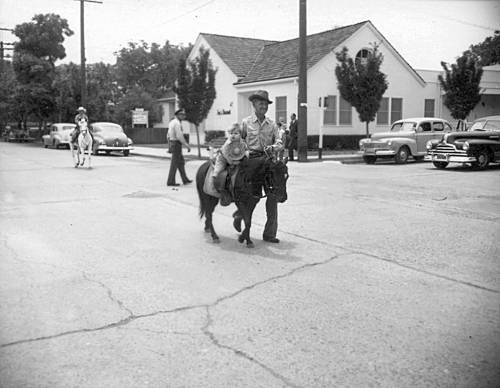 #177
Funeral Home
1387 Locust St.
1939Originally the site of the home of the pioneer Burpee family, the building at the corner of Locust and Cypress Streets (originally School and China Streets) was constructed around 1939 as a private residence. It was converted to the funeral home and city morgue in 1949 (note the stained glass window), then a dance studio in 1955, and a restaurant in 1978. 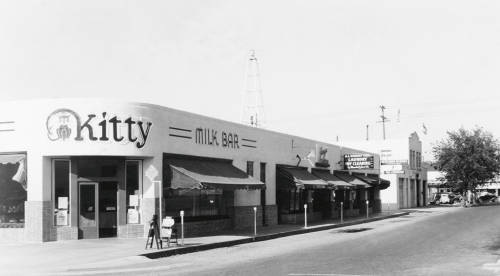 #180
Kitty Milk Bar
1548 Bonanza St.
1947Located at the corner of Locust and Bonanza Streets, Kitty Milk Bar was a popular café for more than 20 years. The café took its name from the nickname of the proprietor’s sister, Catherine. The café was particularly known for its ice cream and donuts. 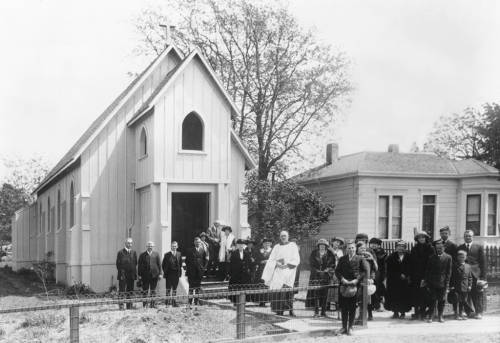 #181
St. Paul’s Mission Chapel
1604 Locust St.
1889Organized in 1888, St. Paul’s (Episcopal) Mission held a fundraising drive to purchase this lot and build a chapel. The sturdy redwood building served St. Paul’s Episcopal Church until 1950, when the church moved to Trinity Avenue, and the congregation “trundled” the building up the hill to its current location at the center of the church property. 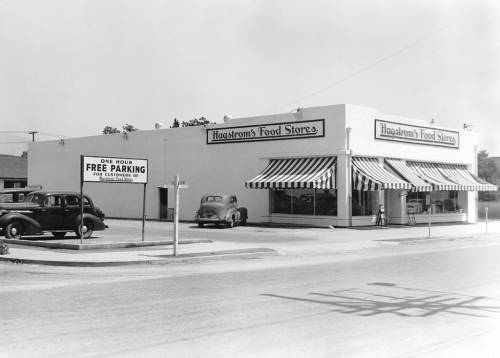 #182
Hagstrom’s Market
1632 Locust St.
1946Emil Hagstrom initially opened one of his cash-and-carry grocery stores – the 25th in his chain — on Main Street in 1932. In 1946, the store moved to this location on Locust Street, offering free parking in the lot adjacent to the store. By 1960, this grocery store was one of 33 in Hagstrom’s chain of markets. 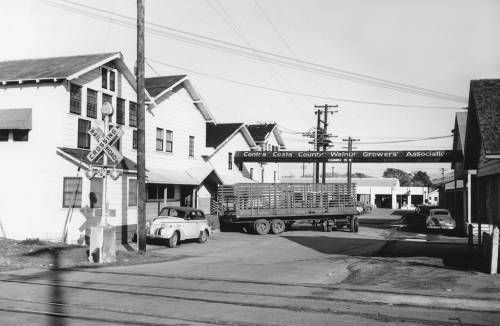 #183
Walnut Growers’ Processing Plant
Locust-Civic-California
circa 1920 – By the late 1800s, walnuts had become a more important local crop in Contra Costa County. To process their walnuts, local growers initially hauled their crops to Oakland or San Francisco. In 1917, local growers formed their own association and, a few years later, built a walnut processing plant next to the railway line that ran along what is today California Boulevard. The plant closed in 1957 after most walnut groves were replaced by housing developments. 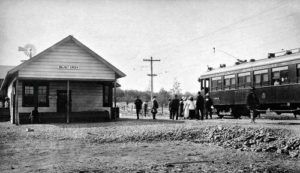 #184
Oakland, Antioch & Eastern Railway
California @ Civic Drive
1911Electricity came to Walnut Creek around 1910 and, with it, electric rail service. The Oakland, Antioch & Eastern – later Sacramento Northern — inaugurated service to Walnut Creek from Bay Point in 1911 and, eventually, provided passenger and freight service from Sacramento through Walnut Creek and on to Oakland and the San Ramon Valley. The train tracks ran along today’s California Boulevard, and the depot stood at this corner, where passengers could board and freight from the adjacent Walnut Growers’ Processing Plant could be loaded.